In this paper, we investigate the causal effects of public and private debts on U.S. output dynamics. We estimate a battery of Cointegrated Structural Vector Autoregressive models, and we identify structural shocks by employing Independent Component Analysis, a data-driven technique which avoids ad-hoc identification choices. The econometric results suggest that the impact of debt on economic activity is Janus-faced. Public debt shocks have positive and persistent influence on economic activity. In contrast, rising private debt has a milder positive impact on GDP, but it fades out over time. The analysis of the possible transmission mechanisms reveals that public debt crowds in private consumption and investment. In contrast, mortgage debt fuels consumption and output in the short-run, but shrinks them in the medium-run. 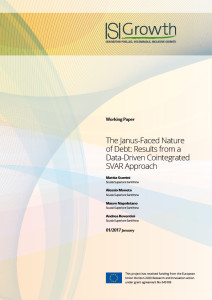 The Janus-Faced Nature of Debt: Results from a Data-Driven Cointegrated SVAR Approach

The FINEXUS Conference in Zurich
Inequality, Redistributive Policies and Multiplier Dynamics in an Agent-Based Model with Credit Rationing