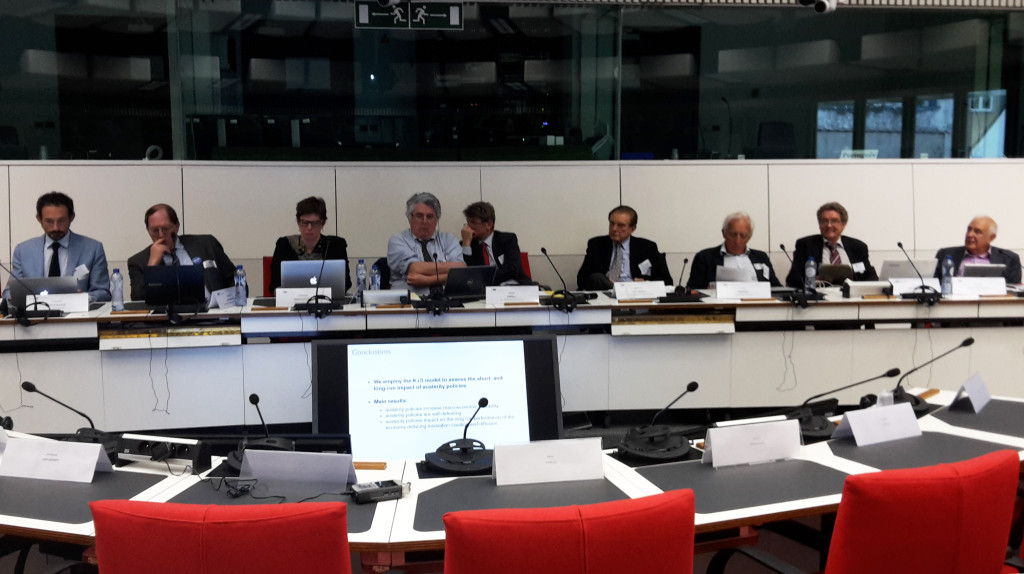 New studies on the impact of the Great Recession have been presented and policy alternatives have been debated at the ISIGrowth Annual Conference held in Brussels on June 1-2. The presentation of ISIGrowth research results and the contributions coming from top macroeconomic experts have opened up an intense debate between ISIGrowth scholars, European Commission policy makers and politicians. The extent to which the crisis has hit European economies, the fall of industrial production in many countries, the danger of sovereign debt crises, the role of the financial sector and the policy implications of research findings were at the centre of presentations in Brussels, shedding new light on why the GDP of European member states is still below its potential level and why in Europe’s ‘periphery’ output is even lower than pre-crisis levels, combined with record-level unemployment.

“One of the main aim of the ISIGrowth project is to highlight what’s going wrong with EU policies”, argued Giovanni Dosi – the project scientific coordinator from the Scuola Superiore Sant’Anna, Pisa – “Innovation policies would not work if macroeconomic policies are not properly set”.

“The way of making economic models for policy has been full of fallacies”, has argued Alan Kirman (Aix-Marseille University, France): “Crises are standard features of modern economies but mainstream models are not able to account for this. Conversely, their underlying assumption of self equilibrating markets has driven policy makers towards austerity measures”.

A parallel with the 1929 crisis has been brought up by Robert Skidelsky. Can crises be avoided or softened by proper policies? “Yes, to the extent to which we have the courage to rediscover Keynes, as Obama has done and the EU has not. Austerity as it occurred in the EU is the opposite of what can help the economies to recover”, has argued Skidelsky.

“The EU crisis is rooted in the private debt accumulated across borders. These Eurozone original sins have not been solved and a new crisis is more than likely”, argued Arturo O’Connell (former head of the Central Bank of Argentine). According to James K. Galbraith (University of Texas at Austin, US) “the 3% constraint – set by the Maastricht Treaty – has no justification in economic terms and is not even in the Treaty. The 90% of resources transferred to Greece have flown into Central and Northern EU banks”.

“All our model show how austerity and neoliberal policies are harmful for the economy. They are self defeating in the sense that they make the Debt/GDP ratio increase, as it happened in the EU”, argued Andrea Roventini (Scuola Superiore Sant’Anna), presenting new research results: “Our agent-based models show how a combination of Keynesian and Schumpeterian policies would fuel a new growth model, leading to lower unemployment”. The working papers with the results of the project are available at http://www.isigrowth.eu/research-results/

Specific studies have addressed the incoherence between fiscal rigour and Europe 2020’s objective of transforming Europe into the most competitive economy in the world. Austerity policies are associated to a fall of public and private investment that is damaging countries’ innovative performance and Europe’s goal of ‘smart, inclusive and sustainable growth’.

Mariana Mazzucato (University of Sussex) stressed that there is a strong need for mission oriented programs, projects aimed at meeting specific societal needs and fueling interconnected activities and productions characterized by high quality jobs and high wages. “For this to occur strong Keynesian policies are needed, only the State can shoulder the weight and the risk of the initial investment for large innovative projects. If the State is stuck on a ‘fixing market failures’ approach it will not support the rise of major innovations”.

Labour market flexibilization and inequality were two other topics discussed in Brussels. “Jobs flexibilization did not help employment in the EU”, stressed out Galbraith. “Inequalities are not inevitable, they are the outcome of specific policy decisions. They are the most urgent issue to be tackled”, argued Kirman. Top managers’ compensation is a major aspect of the drive towards greater inequality, argued Bill Lazonick of the University of Ljubljana team, who documented how the stock buy-backs by major corporations and their focus on finance have contributed to reduce their investments, R&D and innovation activities.

Following the presentations, a roundtable was held with officials from several DGs of the European Commission, members of the European Parliament and politicians, discussing the results and the policy proposals. “We can say the crisis behind us now. However, the recovery is weak and unevenly distributed among member states. In order to avoid other crises we need to push on innovation-led growth and industry” argued Peter Dröll (European Commission-DG Research and Innovation). Robert Strauss, of DG Employment, pointed out the external imbalances that characterise European countries and the need to address them, while Mark Nicklas, of DG Growth, argued that efforts towards innovation may find limited political consensus, and Philippe Keraudren, of DG Research and Innovation, pointed out the challenges for that type of research that aims to be policy relevant.

A special session of the conference has been devoted to meeting civil society organisations and trade unions involved, as part of the consultation activities of the project. The session has been chaired by Susan George; speakers included, among others, Grazia Naletto (Lunaria, Italy), Werner Raza (EuroMemorandum), Martin Myant, (ETUI), Giulia Porino (Finance Watch), Fiona Dove (TNI). Discussion centred on the research report ‘How can Europe change?’ summarising alternatives proposed by civil society, and on the possibility of dialogue between the agenda of scholars and that of civil society.

In the session devoted to the updates on research results, presentations from the teams of Ofce-Sciences Po (France), Zurich University, Bielefeld University, as well as from Sant’Anna School of Advanced Studies of Pisa, University of Sussex and University of Ljubljana reported the new findings on the different activities of the ISIGrowth research project.

CHECK HERE THE SLIDES OF SOME OF THE KEY SPEAKERS:

CHECK HERE THE SLIDES OF SOME OF THE CAN MEMBERS:

WATCH THE VIDEOS OF SOME OF THE KEY-SPEAKERS AT THE ISIGROWTH CONFERENCE, BRUSSELS 1/2 JUNE:

No Man Is an Island: The Impact of Heterogeneity and Local Interactions on Macroeconomic Dynamics
Economic growth and social equity