The law 183 of 2014, evocatively named the `Jobs Act’, has been one of the key actions within the Italian post-crisis strategy. A strategy based, as in the other Southern European countries, on supply side policies as the main road to recover competitiveness, growth and employment. Bringing to completion a reform process begun in the 1990s, the Jobs Act has determined a substantial downsize of workers’ protections.

The main changes are the following:

i) a new contract type – designed to become the prevalent one in the Italian labour market – has been introduced for new hires, removing any form of obligation for workers’ reinstatement in case of firms invalidly firing them,

iii) the use temporary contracts is now easier due to the elimination of previous restrictions on their adoption – before the Jobs Act implementation, firms were allowed to hire using a maximum of 20% temporary over the total amount of contracts

iv) the limit of earnings that can be received in vouchers – hourly tickets, used to compensate workers up to 7.5 euros per hour – has been revised upward. This new discipline strikes with the original aim of vouchers. In fact, the latter were originally designed for accessory and occasional job relationships only, while after the Jobs Act they are increasingly used to remunerate dependent work in a strongly precarious way.

However, the major novelty regards the introduction of the new ‘open-ended’ contract. The new contract allows, for the first time, extremely cheap (for firms) layoffs depriving workers of the reinstatement right which used to protect them during the last 45 years. This element constitutes a substantial reshape of the power balance within the capital-labor bargaining process. In addition, just before the introduction of the new contract, a substantial monetary incentive – lasting three years and taking the form of a reduction in firms’ social contributions burden per employee – has been provided to firms hiring using the new contract form or transforming other contracts into the new one.

Due to the availability of new data sources, the first outcomes of this further labour market flexibilization can now be assessed. In a recent working paper (produced as part of the Horizon 2020 ISIGrowth project on innovation-fuelled, sustainable and inclusive growth leaded by the Sant’Anna School of Advanced Studies of Pisa), we frame the Jobs Act within the overall labour market reform process started in Italy in the mid-nineties, providing a first evaluation of its impacts on the Italian labour market.

This first evaluation of the ‘Jobs Act’ enriches the lively debate that, in Italy, is going along with this further step towards a completely deregulated labour market. An evaluation allowing to underline, again, how mainstream supply-side policies have a common and fundamental feature (among the others): they are constantly reiterated despite all evidences are against their effectiveness and appropriateness.

Taking advantage of all relevant data sources (administrative and labour force data) we highlight how the Jobs Act is failing in meeting its (declared) main objectives: boosting employment and reducing the share of temporary and atypical contracts. As the empirical evidence show, the only increase in employment regards temporary contracts: new permanent contracts, net of dismissal, are only a tiny fraction (20%) of total contracts stipulated during the first nine months of 2015 (see figure 1). 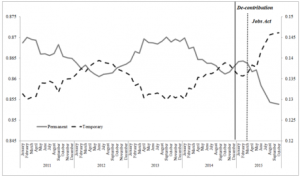 In terms of working hours, results show that part-time contracts are more pronounced within new permanent positions than temporary ones, which has mainly an involuntary character. Labour Force Survey data confirm that the increase in employment during the reform process is weak and mainly due to temporary jobs. In particular, the increase in permanent jobs is characterized by a low productive labour force, in fact only older cohorts (over 55 years old) benefited from the new contract type for standard work during the first nine months. Yet, younger cohorts’ employment and changes in inactivity rate appear to be mainly associated to the European Youth Guarantee (EYG) and the explosion of vouchers, as other administrative data sources indicate. 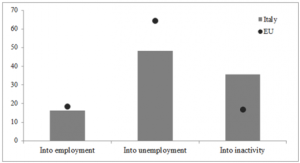 The Jobs Act, in turn, emerges as ineffective in reversing the historically young unemployment rate characterizing the Italian economy. The weak performance of the Jobs Act in creating new employment is also confirmed by LFS data according to which, between the first and second quarter of 2015, Italy is characterized by the outflow from unemployment into inactivity.

As a final remark, the Jobs Act seems to have eased in this initial phase the employment shift toward low skilled and low technology sectors. This element is particularly worrisome if linked to the structural effects of the crisis – in particular, the significant reduction in productive capacity observed between 2008 and 2013 (in a previous paper we provided an analysis of the 2008 crisis’ structural effects in Italy, emphasizing the mistaken idea of tackling such structural issue with further supply side policies).

Thus, the introduction of the Jobs Act and the provision of monetary incentives for firms hiring with the new contract turn out to be ineffective in terms of improving quantity, quality and duration of new jobs. Moreover, such policies risk to accelerate the worsening of Italy’s productivity, employment and growth prospects.