As a response to the 2008 crisis, most Southern European countries introduced labour market reforms with the aim to increase flexibility and competitiveness, in line with EU requirements. In Italy, Law 183 of 2014, evocatively named the `Jobs Act’, has introduced a deep change in industrial relations and labour market dynamics. Bringing to completion a process already begun in the 1990s, the Jobs Act has introduced a new labour contract with no protection from firing in the early years of seniority and has made several changes favouring firms over workers; in addition, incentives to firms hiring with the new contracts have been introduced. This ISIGrowth Working Paper frames the ‘Jobs Act’ within Italy’s overall labour market reform process and provides a first evaluation of its impact on jobs and productivity. Using administrative and labour force data, we find no evidence of the expected boost in employment; an increase in the share of temporary contracts over the open-ended ones is observed; a raise of part-time contracts within the new permanent positions emerges. The ‘Jobs Act’ appears to be ineffective in terms of quantity, quality and duration of the jobs created since its introduction. 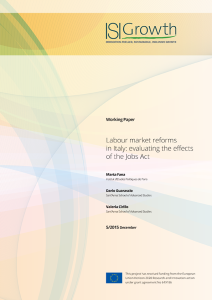 Labour market reforms in Italy: evaluating the effects of the Jobs Act