We build an agent-based model populated by households with heterogeneous and time-varying financial conditions in order to study how different inequality shocks affect income dynamics and the effects of different types of fiscal policy responses. We show that inequality shocks generate persistent falls in aggregate income by increasing the fraction of credit-constrained households and by lowering aggregate consumption. Furthermore, we experiment with different types of fiscal policies to counter the effects of inequality-generated recessions, namely deficit-spending direct government consumption and redistributive subsidies financed by different types of taxes. We find that subsidies are in general associated with higher fiscal multipliers than direct government expenditure, as they appear to be better suited to sustain consumption of lower income households after the shock. In addition, we show that the effectiveness of redistributive subsidies increases if they are financed by taxing financial incomes or savings. 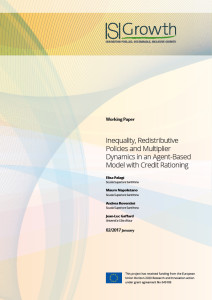 Inequality, Redistributive Policies and Multiplier Dynamics in an Agent-Based Model with Credit Rationing