The following paper surveys the economic literature on employment shifts between different sector, the evolution of skill demand and its implication for wage inequality. The secular rise in employment opportunities and wages for high-skilled, university educated workers is discussed as well as the possible explanations for it pursued in the literature. The main focus of this survey is on literature that relates the effect of technology on the labour market outcomes for workers with different skills/education. The skill-biased technological change and the more recent routinization hypotheses are discussed in more detail from both theoretical and empirical perspective. Different outcomes in terms of wage inequality and employment opportunities in the developed economies suggest that local factors are also important. In view of the recent stream of literature on employment and wage polarization, several non-contradicting explanations regarding the drivers of polarization are discussed: new technology, offshoring and the role of institutions. Overall, the majority of the surveyed studies identify introduction of new technology as a significant driver of the polarizing employment patterns in many of the surveyed countries, whereas its effect on wages and inequality is ambiguous. Difficulties to test the two hypotheses empirically are a reason why the results should be interpreted cautiously. 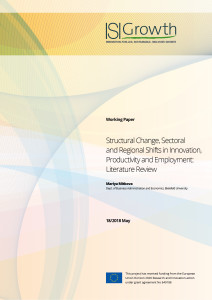