The global economic system is a highly interlinked network, comprised of heterogeneous industries in different countries. In such a complex system, a negative shock to the production of any industrial sector may have two distinct effects on the remaining industrial sectors: on the one hand by increasing/decreasing production it will demand more/less inputs from other sectors (i.e. “upstream” propagation); on the other hand it will be able to supply more/less output to the sectors that use its production as input to their own production process (i.e. “downstream” propagation). In this work, applying network analysis tools we explore the main topological properties of the input-output linkages among industrial sectors in 19 members of the Economic and Monetary Union. Among the other results, on the one hand, we find that intra-country linkages are generally much denser than inter-country linkages. This implies that in many cases, the propagation of a shock to an industry may first tend to fall more heavily on other domestic industries. On the other hand, after uncovering the complexity in the backbone of inter-country linkages, we can identify the main properties that are potentially important to cross-border spillover risks. In particular, first, the tendency to trade with sectors in neighboring countries indicates that geographic linkages could be an important channel in the transmission of negative shocks from one country to another. Second, a subset of sectors playing as hubs, which form a densely connected core among themselves and at the same time bridge sectors in different member countries, could potentially become quick transmitters of shocks to different economies. 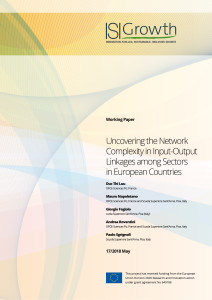