The event, organised by the UCL Institute for Innovation and Public Purpose, discussed a recent legislative proposal from the Italian Senate. It has been held on March 1st at the UK Parliament

Testo: The UCL Institute for Innovation and Public Purpose (IIPP) organised a major event to discuss a recent legislative proposal from the Italian Senate regarding how to regulate the digital economy. The event – organised within the ISIGrowth project activities – has been held at the UK Parliament on March 1st, 2018.

Public policies were key to the advent of the Internet, and should be equally active in regulating and fairly taxing those who have benefitted from it: the ‘Internet giants’ like Google and Facebook. Data should be structured in ways that allow it to be a public good, not only a source of private profits. But doing so represents a major challenge for today’s policy makers.

The Italian Senate has recently elaborated a proposal which aims to create a more symbiotic relationship between the State and digital companies, with the establishment of an effective system of taxation on revenues and profits, a first step towards the regulation of these new digital monopolies. 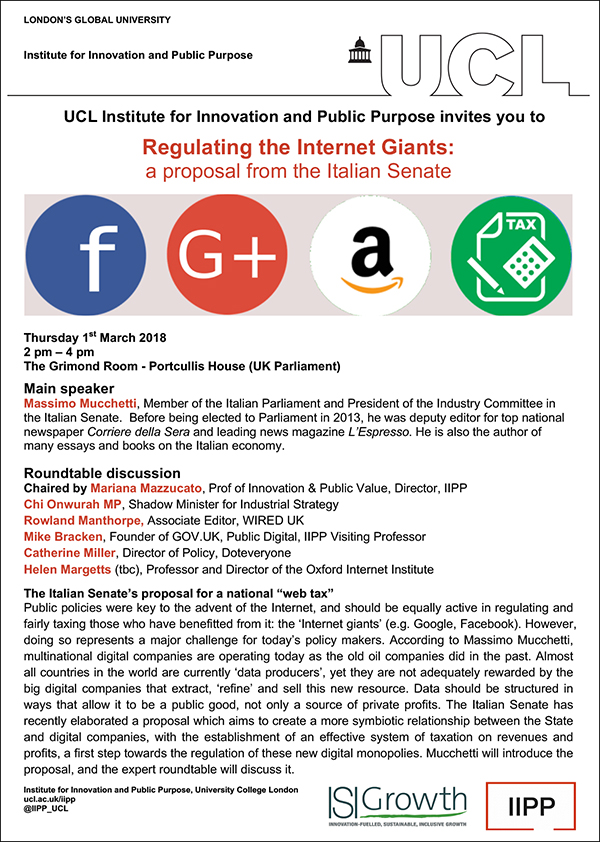