We study the relation between income distribution and growth mediated by structural changes on the demand and supply side. Using results from a multi-sector growth model we compare two growth regimes which differ in three aspects: labour relations, competition, and consumption patterns. Regime one, similar to Fordism, is assumed to be relatively less unequal, more competitive, and with more homogeneous consumers than regime two, similar to post-Fordism. We analyse the parameters that define the two regimes to study the role of exogenous institutional features and endogenous structural features of the economy on output growth, income distribution, and their relation. We find that regime one exhibits significantly lower inequality, higher output and productivity, and lower unemployment than regime two. Both institutional and structural features explain these difference. Most prominent among the first group are wage differences, accompanied by capital income, and the distribution of bonuses to top managers. The concentration of production magnifies the effect of wage dif- ferences on income distribution and output growth, suggesting the relevance of the norms of competition. Among structural determinants, particularly relevant are firm organisation and the structure of demand. The way in which final demand distributes across sectors influences competition and overall market concentration. Particularly relevant is the demand of the least wealthy classes. We also show how institutional and structural determinants are tightly linked. Based on this link we conclude by discussing a number of policy implications emerging from our model. 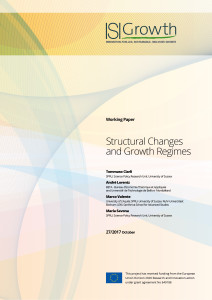