Economies and production systems are subject to incessant processes of structural change fuelled by the dynamics of demand, technology and international competition. The increasing international fragmentation of production, also known as “offshoring”, is an important element of such a (global in scale) process of structural change having important implications for employment and on the way employment gain and losses are distributed across firms, industries, national economies and components of the labour force. This paper assesses the employment impact of offshoring, in five European countries (Germany, Spain, France, Italy, the United Kingdom), distinguishing between different types of inputs/tasks offshored, different types of offshoring industries and types of professional groups affected by offshoring. Results provide a rather heterogeneous picture of both offshoring patterns and their effects on labour, and the presence of significant differences across industries. Along with this variety of employment outcomes, the empirical evidence suggests that offshoring activities are mainly driven by a cost reduction (labour saving) rationale. This is particularly the case of the manufacturing industry where offshoring is found to exert a negative impact among the less qualified (manual) or more routinized (clerks) types of jobs, while the main difference between high and low technology industries has to do with the type of labour tasks that are offshored and the types of domestic jobs that are affected. In high-tech industries the negative effects of offshoring on employment are concentrated among the most qualified professional groups (managers and clerks). A specular pattern is found in the case of the low-tech industries where job losses are associated to the offshoring of the least innovative stages of production and penalise mostly manual workers. 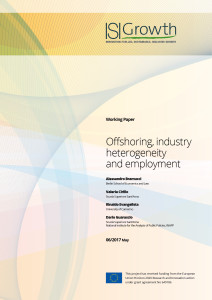 “The Entreprenurial State”, a major conference in Rome
ISIGrowth at the EMAEE Conference