In this work we shall attempt an excursus across fundamentally different streams of modern interpretations of the “ primitive entities” constituting the social fabrics of economic systems. Behind each specific interpretative story, there is a set of ceteris paribus assumptions and also some fictitious tale on a ‘once upon a time’ reconstruction of the theoretical primitives of the story itself. Pushing it to the extreme, as we see it, there are in the social sciences two archetypal (meta) tales. The first says, more or less, that ‘once upon a time’ there were individuals with reasonably structured and coherent preferences, with adequate cognitive algorithms to solve the decision-action problems at hand, and with self-seeking restrictions on preferences themselves. They met in some openings in the forest and, conditional on the technologies available, undertook some sort of general equilibrium trading or, as an unavoidable second best, built organizations in order to deal with technological non-convexities, trading difficulties, contract enforcements, etc. In the alternative tale, ‘once upon a time’ there were immediately factors of socialization and preference-formation of individuals, including some institutions like families shaping desires, representations and, possibly, cognitive abilities. Nonexchange mechanisms of interactions appear in the explanation from the start: authority, violence and persuasion of parents upon children; obedience; schools; churches; and, generally, the adaptation to particular social roles. Here ‘institutions’ are the primitives, while ‘preferences’ and the very idea of ‘rationality’ are derived entities. Which of the primitive tale is chosen bears far-reaching consequences for the interpretation of socioeconomic organizational forms and their dynamics, and involves different theoretical commitments on the interactions between agencies and structures in human affairs. In this work , we argue for the need of moving away from rationality-cum-equilibrium interpretations and of focusing on the varying balances between self’orginizing dynamics and institution-shaped constraints. 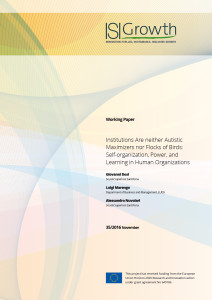 Institutions Are neither Autistic Maximizers nor Flocks of Birds: Self-organization, Power, and Learning in Human Organizations

Technological Innovation and the Distribution of Employment Growth: a firm-level analysis
Growth and survival of the ‘fitter’? Evidence from US new-born firms