In the aftermath of the financial crisis, with periphery countries in the European Union even more falling behind the core countries economically, there have been quests for various kind of fiscal policies in order to revert divergence. How these policies would unfold and perform comparatively is largely unknown. We analyze four such styl- ized policies in an agent-based macroeconomic model and study the economic mechanisms behind their relative success. Our main findings are that the core country sharing the debt burden of the periphery country has almost no effect on the growth dynamics of that region, fiscal transfers have a positive short and long run impact on per capita consumption in the target region, and that technology oriented firm subsidies have the strongest positive long run impact on competitive- ness of the periphery country at which they are targeted. The positive effect of the technology oriented policy is reinforced if combined with household transfers. 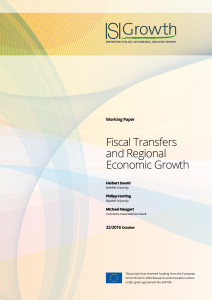