In this work, we investigate the interrelations among technology, output and employ- ment in the different states of the U.S. economy (recessions vs. expansions). More precisely, we estimate different threshold vector autoregression (TVAR) models with TFP, hours, and GDP, employing the latter as threshold variable, and we assess the ensuing generalized impulse responses of GDP and hours as to TFP shocks. We find that positive productivity shocks, while spurring GDP growth, display a neg- ative effect on hours worked at least on impact, independently of the state of the economy. In the 1957-2011 period, the effects of productivity shocks on employment are abundantly negative in downturns, but they are not significantly different from zero in good times. However, the impact of TFP shocks in different business cycle regimes depends on the chosen sample: after the mid eighties (1984-2011), produc- tivity shocks increase hours during recessions. Finally, we express and test some conjectures that might have caused the changes in the responses in different time periods. 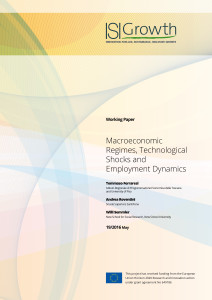 What is the future of Europe’s policies on fiscal austerity?
No Man Is an Island: The Impact of Heterogeneity and Local Interactions on Macroeconomic Dynamics