This report revisits the industrial and technological policy of two Latin American Economies (Argentina and Brazil) and two Asian economies (China and Korea) and discusses their implications for long run growth. To link the role of these policies to growth in a more rigorous way, it develops a North-South technology gap model which combines the Schumpeterian approach to technical and structural change with the Keynesian perspective on effective demand and the Balance-of-Payments (BOP) constraint. It is argued that differences in these policies drive the evolution of relative productivity and relative wage, giving rise to different paths of convergence or divergence between South and North. Formally, differences in policies are reflected in different values of the structural parameters of the model. Convergence in Asia and divergence in Latin America have been extensively debated topics in the literature on comparative economic development. This literature highlights the crucial role of the industrial and technological policy (ITP). It is argued that the results of the technology gap model are consistent with the findings of this literature and helps understand the forces behind convergence and divergence. 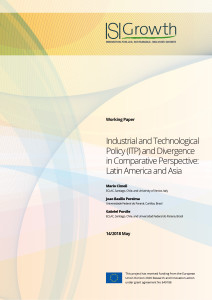