The aim of this article is twofold. First, we are interested in analysing the long-term dynamics of science and technology at country level to investigate the roots of countries innovative success and to ascertain the historical origins of the so-called “European Paradox”. Secondly, we carry out a taxonomic exercise to empirically verify the existence of different type of NSIs. Preliminary results show that no European paradox exists, at least in science. Europe still lags behind the United States in terms of top-notch research. Furthermore, the historical examination highlights that US scientific leadership starts back in time, definitely overtaking Germany and UK right after WWII. Both publication and patent data show very asymmetric performances among European countries, where differences have ancient roots. The remarkable technological catch-up of Japan and, to a lesser extent, South Korea are highlighted by the historical perspective adopted. Then, the taxonomic exercise shows the existence of three different groups of countries (i.e. the “Leading Elite” – the advanced countries – the “Fragile Catching-up” – the Eastern and Southern Europe countries – and the “Missed Opportunities” – the Latin American countries) with rather significant differences in their level of scientific and technological production, level of education, and propensity towards product or process innovations. 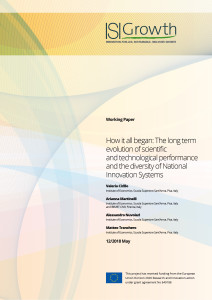 How it all began: The long term evolution of scientific and technological performance and the diversity of National Innovation Systems