From a wage led growth strategy and a European minimum wage to the role of the new technologies. Six proposals from the ISIGrowth’s Civic Action Network for building an alternative labour policy in Europe

In spite of the Europe 2020 strategy’s goal to raise 20 million people out of poverty, the effects of austerity in many of the countries of the European Union are still long-lasting.

Despite some progress over the 2014-15 period has been made, unemployment and particularly youth unemployment rates still remain exceptionally high. 17 millions are the total European unemployed people and 3 of them are youth. When looking at EU28, these figures increase reaching 22 millions of unemployed whose 4.5 are youth.

Moreover the quality of jobs is worsening almost everywhere and in-work poverty rates – which measure the incidence of what is commonly called ‘working poor’ – continue to rise.

Trade unions, political forces and civil society groups have developed several proposals for action on labour policy. Policy proposals have been summarized in the report ‘’How can Europe change’’, released within the ISIGrowth project. This Policy Brief is the result of the consultation carried out by Lunaria with the Civic Action Network, the network of the civil society organizations created within the ISIGrowth’s project. 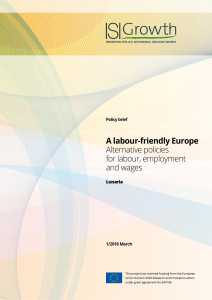