The patterns of innovation diffusion are well approximated by the logistic curves. This is the robust empirical fact confirmed by many studies in innovations dynamics. Here we show that the logistic pattern of innovation diffusion can be replicated by the time-dependent stochastic process with positive feedbacks along the diffusion trajectory. The dynamic increasing returns process is modeled by generalized Polya urns. So far, urn models have been mostly used to study the [path-dependent] limit properties. On the contrary, this work focuses on the transient [finite time] properties studying the conditions under which urn models capture the logistic trajectories which often track empirical diffusion process. As examples, we calibrate the process to match several cases of diffusion of motor ships in European countries. 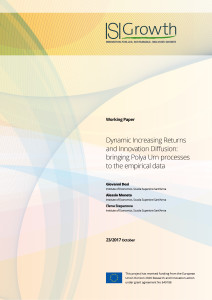