The business corporation is the central economic institution in a modern economy. A company’s senior executives, with the advice and support of the board of directors, are responsible for the allocation of corporate resources to investments in productive capabilities. Senior executives also advise the board on the extent to which, given the need to invest in productive capabilities, the company can afford to make cash distributions to shareholders. Motivating corporate resource-allocation decisions are the modes of remuneration that incentivize and reward the top executives of these companies. A sound analysis of the operation and performance of a modern economy requires an understanding of not only how much these executives are paid but also the ways in which the prevailing system of executive pay influences their decisions to allocate corporate resources. In the United States since the last half of the 1980s the overriding goal of U.S. corporations has been to “maximize shareholder value,” with corporate performance measured by a company’s “total shareholder return”: percentage stock-price appreciation plus dividend yield. Also since the 1980s, the most important components of the total compensation of senior executives have been modes of stock-based pay in the forms of stock options and stock awards. This stock-based pay is structured to incentivize executives to make corporate allocation decisions that will boost the stock prices of the companies that employ them and reward them for achieving that objective. There are three drivers of stock prices: innovation, speculation, and manipulation. The first critical question that this paper addresses is which of these drivers, individually or in combination, contribute to a company’s stock-price performance. Then we can ask the second critical question: Does executive compensation reflect the success of the company in value creation, or the power of senior executives to engage in value extraction? The “value- extracting CEO” hypothesis posits that, in the United States, a significant portion of senior executive compensation rewards them for making decisions that foment speculation and manipulate stock prices, and thereby extract value for their own personal gain. In section four of the paper, I invoke the theory of innovative enterprise to support this hypothesis and debunk the dominant ideology that companies should be run to “maximize shareholder value.” Finally, I elaborate the policy implications for controlling the power of the value- extracting CEO, including a) banning stock buybacks, b) requiring executive compensation that rewards innovation rather than speculation and manipulation, and c) placing stakeholders representing households as taxpayers, workers, and consumers on boards of directors of publicly listed companies, along with shareholders who represent households as savers. An intellectual precondition for these reforms is the rejection of the ideology that companies should be run to maximize shareholder value, which means replacing agency theory with innovation theory as a mode of analyzing how the operation of an economy, supported by the strategies and structures of the business enterprises within it, can attain the objectives of stable and equitable economic growth. 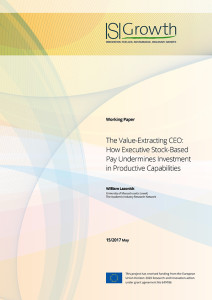 The Functions of the Stock Market and the Fallacies of Shareholder Value
Share Repurchases in Europe. A Value Extraction Analysis