Price gouging in the US pharmaceutical drug industry goes back more than three decades. In 1985 US Representative Henry Waxman, chair of the House Subcommittee on Health and the Environment, accused the pharmaceutical industry of “gouging the American public” with “outrageous” price increases, driven by “greed on a massive scale.” Despite many Congressional inquiries since the 1980s, including the case of Gilead Sciences’ extortionate pricing of the Hepatitis-C drug Sovaldi since 2014, the US government does not regulate drug prices. UK Prescription Price Regulation Scheme data for 1996 through 2008 show that, while drug prices in other advanced nations were close to the UK’s regulated prices, those in the United States were between 74% and 152% higher. Médecins Sans Frontières (MSF) has produced abundant evidence that US drug prices are by far the highest in the world.

The US pharmaceutical industry’s invariable response to demands for price regulation has been that it will kill innovation. US drug companies claim that they need higher prices than those that prevail elsewhere so that the extra profits can be used to augment R&D spending. The result, they contend, is more drug innovation that benefits the United States and indeed the whole world. It is a compelling argument, until one looks at how major US pharmaceutical companies actually use the profits that high drug prices generate. In the name of “maximizing shareholder value” (MSV), pharmaceutical companies allocate profits from high drug prices to massive repurchases, or buybacks, of their own corporate stock for the sole purpose of giving manipulative boosts to their stock prices. Incentivizing these buybacks is stock-based compensation that rewards senior executives for stock-price performance.

Like no other sector, the pharmaceutical industry puts a spotlight on how the political economy of science is a matter of life and death. In this paper, we invoke “the theory of innovative enterprise” to explain how and why high drug prices restrict access to medicines and undermine medical innovation. An innovative enterprise seeks to develop a high-quality product that it can sell to the largest possible market at the most affordable price. In sharp contrast, the MSV-obsessed companies that dominate the US drug industry have become monopolies that restrict output and raise price. 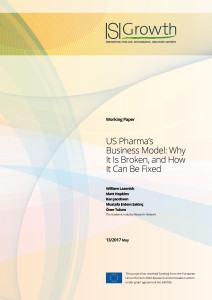 US Pharma’s Business Model: Why It Is Broken, and How It Can Be Fixed