Since the last decade, new Junior stock markets or second-tier stock markets have emerged in various countries, often influenced by the Alternative Investment Market, created by the London Stock Echange in 1995, and considered by numerous economic and political actors as a reference. Junior Markets are characterised by simplified listing processes and customised information standards. The creation of junior stock market segments can be seen as an instance of financialisation and of the spread of market-led financial architectures to economies traditionally characterised by credit-based financial systems, according to the evolutionary taxonomy outlined by Dosi (1990). This begs the question as to whether we are witnessing an increasing convergence towards financial systems that are typical of the Anglo-Saxon world. With these questions in mind, in this paper we perform an institutional comparison of junior stocks markets located in countries characterised by different varieties of capitalism : AIM London, AIM Italy, Alternext, Entry Standard, OMX First North, Mothers, Tokyo AIM, JASDAQ. We find that while the « new » junior stock markets were largely inspired by the AIM London model, country specificities still persist. Nevertheless, complex interbreeding properties may be highlighted. On one side, while the AIM’s rely on principles-based regulation through specific intermediaries; it is rather consistent with the description of credit-based systems as allocating finance through discretionary means. On the other side, while the higher centralisation of admission processes and regulatory oversight in Germany and Japan is linked to more centralised and institutionalised mechanisms’ relevant to credit-based CMEs, the rules-based regulatory approach contributes to move away from discretionary financial allocation criteria and long term relationships. 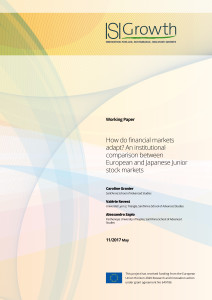 How do financial markets adapt? An institutional comparison between European and Japanese Junior stock markets