In this work we develop an agent-based model where hysteresis in major macroeconomic variables (e.g. GDP, productivity, unemployment) emerges out of the decentralized interactions of heterogeneous firms and workers. Building upon the model in Dosi et al. (2016, 2017), we specify an endogenous process of accumulation of workers’ skills and a state-dependent process of entry, studying their hysteretic impacts. Indeed, hysteresis is ubiquitous. However, this is not due to market imperfections, but rather to the very functioning of decentralised economies characterised by coordination externalities and dynamic increasing returns. So, contrary to the insider-outsider hypothesis (Blanchard and Summers, 1986), the model does not support the findings that rigid industrial relations may foster hysteretic behaviour in aggregate unemployment. On the contrary, in line with the recent discussion in Ball et al. (2014), this contribution provides evidence that during severe downturns, and thus declining aggregate demand, phenomena like lower investment and innovation rates, skills deterioration, and declining entry dynamics are better candidates to explain long-run unemployment spells and lower output growth. In that, more rigid labour markets dampen hysteretic dynamics by supporting aggregate demand, thus making the economy more resilient. 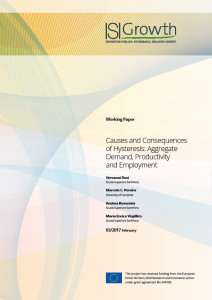 Causes and Consequences of Hysteresis:
Aggregate Demand, Productivity and Employment