This document contributes to Task 1.4 of the ISIGrowth project by collecting empirical evidence with respect to shifts in employment between manufacturing and service sectors and the role of R&D investments as well as productivity dynamics in this process. In particular, relying on World Bank as well as on OECD STAN sectoral-level data for European countries the following questions are addressed:

The motivation to explore these questions is twofold. First, it should help to identify the driving forces of the observed sectoral employment shifts. Second, and more importantly, gaining a better understanding of the role of R&D for employment and for sectoral shifts clearly has important implications for innovation policy. If certain sectors can be identified where increases in R&D investments tend to have particularly strong positive effects on employment, then fostering investments in those sectors would not only have direct effects on productivity and international competitiveness in such sectors but would also contribute to positive second order effects through demand stimulation and human capital improvements, e.g. through learning by doing effects. Also, the analysis sheds light on the question in how far the observed shifts in employment might be desirable or at least necessary from the perspective of overall labor productivity increases.

From a methodological perspective, we combine a pure descriptive treatment of the time series data for different countries and sectors with a shift-share analysis (see e.g. Fagerberg (2000), Maudos et al. (2008) and OECD (2014)) which disentangles productivity dynamics into within-sector effects and changes that are driven by labor movements betweeen sectors and pooled as well as sector-specific regressions analyzing the relationship between R&D and employment. The extensive theoretical and empirical literature dealing with the effects of R&D on employment is discussed in detail in the companion paper Mitkova (2016) and therefore we abstain from reviewing these streams of literature here. 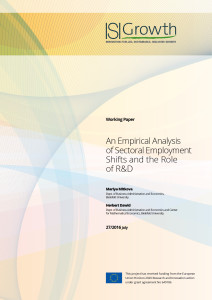 Financing Renewable Energy: Who Is Financing What and Why It Matters
Measures, Drivers and Effects of Green Employment: Evidence from US Local Labor Markets, 2006-2014