After the crisis started in 2008 Italy’s industry has lost close to one quarter of its industrial production. The possibility for the country to reconstruct its production capacity largely depends on whether a new industrial policy is developed. The article documents the decline of Italy’s industry and technology and the impact of the crisis. The demise of traditional industrial policy in Italy and Europe in the last two decades is examined, assessing the consequences of the retreat of public action in this field and the evolution of the current debate. A detailed analysis of the current tools used in Italy’s industrial and innovation policy is carried out, showing its ‘horizontal’ approach, limited resources, fragmented measures, modest impact. Current initiatives appear unable to support a revival of production and domestic private investment, close Italy’s gap in R&D and innovation and upgrade its technological activities. In conclusion, a proposal for a new industrial policy combining Italian and European initiatives is summarised. 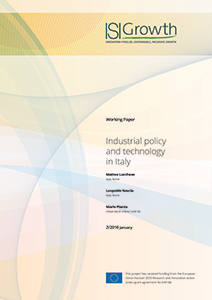 Europa: quanti piani B esistono? Intervista a Giovanni Dosi
Modelling the virtuous circle of innovation. A test on Italian firms