We study an economy with a high degree of financialization in which (non-financial) firms need loans from commercial banks to finance production, service debt, and make long-term investments. Along the business cycle, the economy follows Minskyan dynamics with firms traversing various stages of financial fragility, i.e. hedge, speculative and Ponzi finance (cf., Minsky, 1978, 1986). In the speculative finance stage, cash flows are insufficient to finance debt repayments, and banks are willing to provide roll-over credits in order to prevent a default on the debt. In the Ponzi finance stage, banks are still willing to keep firms alive through ”extend and pretend” loans, also known as zombie-lending (Caballero et al., 2008). This lending behavior may cause credit bubbles with increasing leverage ratios. Empirical evidence suggests that recessions following such leveraging booms are more severe and can be associated to higher economic costs (Jord`a et al., 2011; Schularick and Taylor, 2012). We therefore study policy measures that might mitigate the severity and intensity of the economic losses ensuing from such severe downturns. We investigate micro- and macro- prudential regulations aimed at: (i) the prevention and mitigation of credit bubbles, (ii) ensuring macro-financial stability, and (iii) limiting the ability of banks to create unsustain- able debt. Our results show that the use of non-risk-weighted capital ratios have slightly positive effects, while cutting-off funding to all financially unsound firms (speculative and Ponzi) has very strong positive effects. However, merely cutting-off funds to Ponzi financed firms has hardly any effect at all. 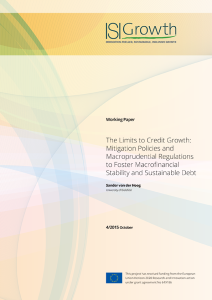 Bubbles, crashes and the financial cycle: insights from a stock-flow consistent agent-based macroeconomic model
The Intellectual Legacy of Christopher Freeman